Read the latest copy of our Dispatch newsletter

Carntyne Transport are supporting the RHA’s National Lorry Week. Running from 26th to 31st October, the ‘Love the Lorry’ campaign aims to raise awareness of the haulage industry.

Carntyne would like to congratulate all the team who took part in the Nampak charity cycle from London to Milton Keynes at the weekend.

We are excited to announce the launch our newly designed website. The site showcases our offerings and reflects our status as a leading transport and logistics provider.

Another Successful Year at Multimodal

Carntyne enjoyed another succesful presence at this year's Multimodal at the NEC, Birmingham. 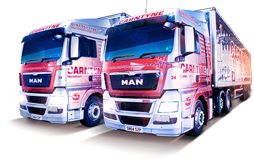