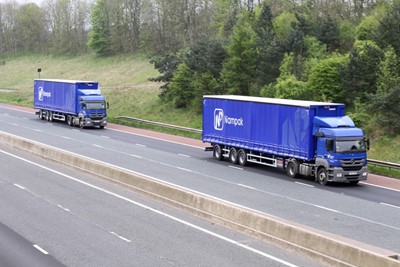 Carntyne Transport, has increased its current longer semi-trailer fleet by a third, taking its total fleet involved in the government trial to 15.

The 15.65 metre semi-trailers are being manufactured by SDC Trailers, 10 of which entered the fleet earlier this year and the additional five became operational at the end of September 2014.  Carntyne is operating the trailers on their contract with Nampak Plastics Europe Ltd, the UK’s leading manufacture in High Density Polyethylene (HDPE) plastic bottles for the food and drink industry.

The longer semi-trailer trial was launched in 2012 as part of the Government's Logistics Growth Review. The trial involves a total allocation of 1,800 semi-trailers of 14.6 metres and 15.65 metres in length and is expected to save over 3,000 tonnes of C02 over 10 years.

David Paterson, managing director of Carntyne, said “The lightweight high cube nature of the products being transported is ideal for these longer trailers as weight is not a concern. We have made an investment in the region of £500,000 and are hoping that the trial is a success within the wider industry .”

“The response to the trailers from both our customer and our driver team has been very positive. All our drivers undertook a rigorous training programme which ensured a smooth transition to the longer trailers”

The longer trailers will be operating from Nampak’s manufacturing facilities in Bellshill and Newport Pagnell, servicing dairies in the north of Scotland and southern England.

Roger Triscott, Head of Supply Chain and Projects for Nampak, said “We are pleased with the new trailers and how they have integrated into the operation. Being able to work in partnership with Carntyne on the design and specification allowed us to create a trailer which met the specific needs of our product. The additional space also allowed us to introduce air vents and roof modifications which help control heat build-up within the trailers.”