A Day in the Life of a Carntyne Driver 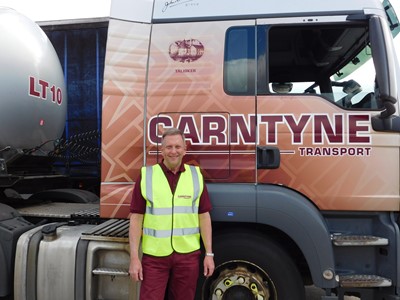 Gerry has been a valued member of the Carntyne team, working as an HGV driver with the company for just over 7 years. Before working for Carntyne, Gerry worked as an HGV driver for Wincanton for 4 years, and prior to that, was a shift manager at Motorola for just over a decade. Gerry got a flavour for a career on the road when he was in the sales office at Pickford Removals as a young man. This role led Gerry to helping out with the removals which gave him the excitement of being out in the fresh air, doing new things and meeting new people. Although it was hard work, Gerry found it very rewarding and as a result, went on to get his HGV licence at the age of 22.

A normal day for Gerry of late has seen him delivering loads of bulk spirit anywhere from Brechin in the North to Poneil in the South and from Girvan in the West to Edinburgh in the East. Gerry currently works day shift Monday to Friday which involves a 6:30 start at Carntyne’s Springburn depot. Gerry doesn’t have a set finish time; he stops for the day whenever the work is complete as customer service is a key priority. Each day is different depending on the jobs that are planned, the amount of time spent at sites, or the road conditions.
Gerry works closely with Carntyne’s transport planning team, based at Springburn. The team work hard to plan the routes and inform Gerry of where he needs to go throughout the day. The drivers and the planning team need to be ready for anything as customer requirements can change frequently. Gerry will arrive at the Springburn depot to start his day, and after completing his pre-shift checks, he will head out on his first job and sees where the day takes him…

I pick up with Gerry at Springburn having just completed his pre-shift checks. We then set off to Blackgrange with an empty tank for loading. It’s sunny and the traffic is clear so we get a good start to the day. It’s a 45-minute drive through to Blackgrange so there’s time to have an interesting chat with Gerry about what it’s like to work at Carntyne. Gerry tells me he enjoys life as a driver as he feels very independent; he likes being out on the road and has confidence that Carntyne trust him to get the job done.

When we arrive at Blackgrange, Gerry checks in with security at the Gatehouse before we drive across the site to drop off the empty tank. I’m impressed watching Gerry reverse park the truck into one of the spaces. I could do with a pointer or two for my little car. Gerry follows the Health and Safety protocol when detaching the tank from the unit and once he has finished all the paperwork, he is then instructed by the transport planning team to pick up a full tank on-site.

We’re off again to locate the tank and once Gerry attaches it to his unit and carries out checks on the trailer, we head back to the gatehouse to get security to check the paperwork and the seal on the tank.

Now it’s time for the next leg of our journey, heading back west to Shieldhall to drop off the tank. I’m amazed that you can’t feel the weight of the tank when in the cab and Gerry makes it looks easy to drive a 44 tonne truck. Now it’s a bit later, the traffic is heavier, which just shows how hard it must be to plan a driver’s day. On the drive, Gerry fills me in on the in-cab technology. Carntyne’s planning team can keep track of the vehicle to keep the customer informed if needed. The technology can also assess driver performance, helping reduce fuel consumption.

When we arrive at Shieldhall, we go through a similar process of getting checked in at the gatehouse, security carrying out the routine checks, and then off to drop the full load on-site. Gerry is then instructed by the team to pick up another empty and goes through the security process once again on the way out of Shieldhall. Gerry takes me back to Springburn where he has a well earned break before taking the empty tank back to Blackgrange.

Being on the road with Gerry has given me a great insight into the operations at Carntyne; the planning that the team need to undertake to make the day run smoothly for all the drivers and for the customers, the Health & Safety and security procedures to keep everyone safe, and the team effort to provide a high-quality service to our customers. Thanks to Gerry and the planning team for the adventure!